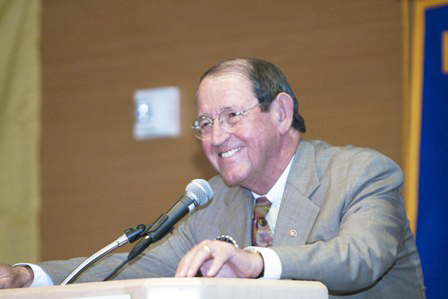 San Jose Magazine named him one of Silicon Valley’s 100 most powerful leaders. Pulitzer Prize winning author and Washington Post reporter, Haynes Johnson, described Larry Stone in his best selling book, Sleepwalking Through History, as ”bright, articulate; an American rarity, a proven political success in a time of political failure.“ Longtime San Jose Mercury columnist Scott Herhold said Stone is one of the top 25 most powerful leaders in San Jose, and the third most powerful elected official.

He was first elected Assessor in 1994 and overwhelmingly re-elected seven times by the residents of Santa Clara County, which stretches north to Palo Alto, south to Gilroy, and includes San Jose, the "Capital of Silicon Valley."  The county boasts a population of 1.9 million - greater than that of 13 states.

Stone has been a financial manager on Wall Street and was co-founded a successful Bay Area real estate investment and development firm. He served 16 years as a council member and mayor of Sunnyvale, a period during which the city earned an international reputation for effectiveness and became a model for President Clinton and Vice President Gore’s efforts to reform the federal bureaucracy. President Clinton said, ”The National Performance Review was modeled in part upon the remarkable reinvention efforts pioneered by the City of Sunnyvale, where Larry Stone served as mayor.“

As County Assessor, Stone has overseen remarkable improvements to streamline the operations of his office, eliminate backlogs, and achieve higher levels of public service, all while consistently operating substantially under budget. The State Board of Equalization acknowledged his office as one of the best-managed assessors’ operations in California.

Larry Stone also has been an active and effective civic leader in many fields ranging from the arts, to education, to the environment. He was instrumental in co- founding an innovative $11 million education endowment foundation that has contributed nearly $20 million to benefit a local, public elementary school district. A native of Seattle, he has an MBA from the University of Washington and has studied at the Institute of Politics at Harvard’s Kennedy School of Government. He and his wife Carmen have lived in Sunnyvale since 1970, where they raised three sons.

More in this category: About the Office »
back to top